In a March 5, 2018, Norwich Bulletin article entitled "Trash Change Considered" it was reported that I was looking into options that the Town may wish to consider in dealing with the current setup at the Transfer Station. Several Eastern Connecticut towns were examining the same issue as a possible cost savings measure for taxpayers. The two most probable companies that were approached by me were Sterling Superior Services and Willimantic Waste, who is our current contractor at the Transfer Station. Sterling came back with not being interested other than to continue with their current service of individual home pickup/curbside subscription. Willimantic Waste offered a one-on-one meeting and ultimately it was decided that the current operation would be the most cost-effective for Bozrah at this time.

During this inquiry, it was learned that between Sterling Superior and Willimantic Waste more than half of the households in Bozrah subscribe to their curbside pick-up at an annual cost of approximately $400.

That number is almost four times what users of the Transfer Station incur between the annual permit fee of $40 and the yellow trash bags at $15 for a roll of ten.

On May 21st I received the attached letter from Willimantic Waste citing an ongoing problem with the sorting of materials coming out of Bozrah - see attached letter. In an earlier TWIB, I rolled out the small up-tick in fees only in the area of Bulky Waste. Since then, some of you have chosen to "hide" items in the yellow trash bags to avoid the extra dollar or two that it might cost otherwise. This letter is a forewarning that we could potentially lose our contract with Willimantic Waste and that we would have no choice but to face higher fees with some other arrangement. I have heard it being told that these minor changes at the Transfer Station are a personal agenda on my part. I assure you that I am working for the benefit of all taxpayers so that we get the best service that we can for the dollars being spent. The Transfer Station is a true deal for the people of Bozrah. To verify this assertion please check the surrounding towns. Please help us to do our jobs by complying with what we need to do. 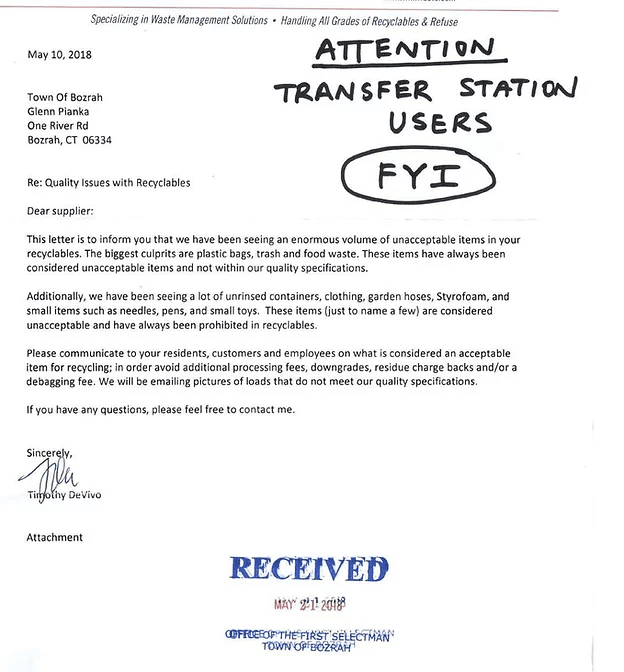